Today I offer you my method of learning the Russian language through Russian movies. This is the 1st video of the series; if you like it please leave your comments and I’ll continue making next videos of the series. Russian with Movies 🙂
For this video, I’ve chosen the short episode of the super popular Soviet film called “Служебный роман” (“The Office Romance”).

It is a Soviet film, lyrical comedy in two episodes directed by Eldar Ryazanov. The film was created at the Mosfilm Studio in 1977; in 1978 it had over 58 million viewers.

1978 – The Best Film of the Year, Alisa Freindlich and Andrei Myagkov – the best actors of the year (according to the survey of the magazine “Soviet screen”)

1979 – State Prize of the RSFSR named after the Vasilyev brothers to:

You can check for the full film on youtube; there are a lot of channels, including Mosfilm channel (https://www.youtube.com/user/mosfilm), which offer this movie.
You can find the full subtitles of the film at http://www.vothouse.ru/films/sluzhebnyj_roman_text.html

If you would like to further improve your knowledge, you can check my other videos and learn Russian with Russian movies. 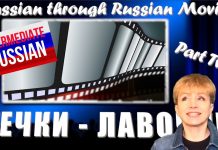