Today we learn Russian through Movies again! This is the 2d video of the series.
For this video, I’ve chosen one of my favourite films, called “Печки-лавочки” (I don’t give you an English translation for the title, because I think it’s impossible to translate the title properly).

It is a film by Vasily Shukshin, filmed at the Gorky Film Studio in 1972.

From a village on the Altai River, a husband and his wife are leaving to the resort with one ticket. The village, the life, the people, the songs, the feast, are filmed almost in a documentary manner, and the journey to Moscow itself is full of ridiculous situations, but at the same time causing sympathy and even a slight sadness. These situations are seen by a man from the village who has become a writer, actor and the director. On the train, he met the charming thief and the linguist who invited them to stay with him in Moscow. In the end, the couple gets to the sea.

You can check for the full film on youtube; for instance, you can find it at https://youtu.be/qjHh_p7wAJ0

If you would like to further improve your knowledge, you can check my other videos and learn Russian with Russian movies. 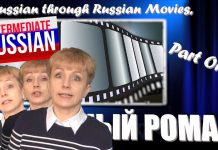